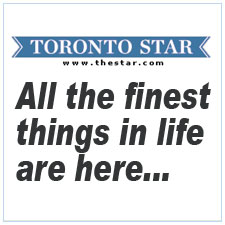 Here’s what Susan Delacourt has to say about why the Toronto Star didn’t report on a rumour that Liberal MP Bob Rae was resigning:

“A couple of days ago, we heard a rumour at the Star that Bob Rae was going to be appointed as ambassador to Israel. Being old-fashioned types, we decided to check before publishing.
Here’s Rae’s response: “Completely, utterly, and totally ridiculous. False, a lie, and a calumny. ”
So we didn’t write a story about it.
The end.” (see here)

Check out the different set of standards the Toronto Star used when they reported on the  rumour of Conservative minister Peter MacKay resigning here.

Ummm… Susan, what do you have to say now?

To an audience that laps up this kind of pap, Margaret Atwood doesn’t disappoint:

– “My horoscope today said I should not make any unnecessary enemies.” There was much laughter from the audience.
– “I do not pick fights. Fights somehow break out in my vicinity.”
– saying they [gov’t] had turned into one that’s all about “airplanes and jails. “The airplanes are useless against the real foes we face, which are scarcity and inequality.”
– As for the jails, who will fill them? she asked. “Is it a case of build it and they will come?”
– “Is the big idea really to bankrupt the social welfare system … by spending all of our money on planes and jails?”
I guess for the champagne socialist crowd, this is high-end stuff but I’m reading another book by Christopher Hitchens, so it’s kinda hard for me to compare.
Check out an earlier post on Atwood responding to SunMedia over her bizarre call for them to be blocked by a petition from Avaaz and see what you think of her big brains here.

SunMedia to start running “Down the drain” series on CBC

In an effort to put more pressure on the CBC to come clean on Access to Information requests, Brian Lilley writes how QMI will be running a regular series of stories on Mother Corp called “Down the drain”. (see here)

Look for an all out attack from the CBC and it’s apologists.