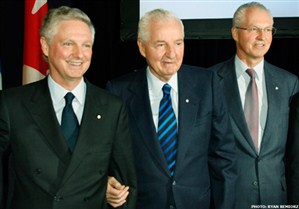 You have to wonder what goes through the mind of Liberal Bob Rae when he states, apparently with a straight face, to the media that he has no knowledge of Jean Chretien working the back-room trying to install him as “interim” leader.

“Mr. Chretien is very much a free agent in life. He cares about the party and he is free to speak his mind,”

“He’s not acting on anybody’s instructions. Whatever he’s doing, he’s doing on his own.” (see here)

Is it a pathological trait or does Rae believe the public is that stupid? Chretien’s daughter is married to the son of Power Corp’s Paul Desmarais which has Rae’s brother John on its Board of Directors.

Can you also imagine what the remnants of the Liberal party apparatus think of another behind-the-scenes leader instalment after watching Ignatieff decimate their party after being put there by the back-room boys?

If I had any sympathy for NDP MP Ruth Brosseau, it is now gone after reading her first ever interview (Google translation from original interview in English converted to French back to English):

– “It was really a shock to see the results on election night. But the longer it went, the more we felt the excitement. Since that time, I work very hard. I learn a lot”

– “I am really excited at the idea of ​​going in the constituency. I was told it was a very beautiful area.”

Check out this part where the interviewer Martin Francouer transcribes a lengthy silience:

“A long silence in the interview. Twenty-seven seconds when all we hear is the sound of a few sheets of paper that manipulates or the whisper of some people suspected by his side. Twenty-seven seconds of hesitation before the Communications Officer to intervene to ask that question again”

The rest of the interview is her reading prepared statements like this:

“It was unexpected, but I am very excited to work for the NDP. Really. I do not really expect to win.But I believe in the vision that Jack Layton of the country, a country in which Canadians and Quebecers can work together”

Brosseau deserves everything she is in for. (see here)