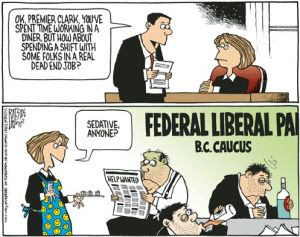 Progressive Alberta premier Alison Redford and BC Liberal premier Christy Clark, who has tried to make-believe she isn’t (and always been) a hard-core Liberal, both get named by John Ibbitson as members of PM Stephen Harper’s “unofficial opposition”. (see here)

Now we’ll await Ibbitson to list those Harper-haters he said were in the Ottawa Press Gallery.

Only Liberals allowed to “interfere” in provincial elections 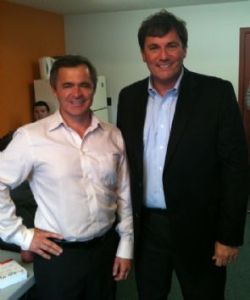 Here’s the headline that the Chronicle Herald ran Friday – Federal Tories told to butt out of provincial elections :

‘In an unusual turn, members of the federal government have directly taken on provincial politicians in recent weeks.’

Liberal MP Wayne Easter – “We’ve never seen that kind of stuff before. There’s a bridge that should not be crossed. With this Harper crowd, that bridge is being crossed and it certainly affects the relationship with future governments. It just shouldn’t be.”

So I’m sure now Wayne “Doorknobs” Easter will be featured in a follow-up Herald story condemning his own caucus member Dominic Leblanc right?:

“Provincial Liberals brought in some star power to try and make inroads for Tuesday’s election. Federal Liberal MP Dominic Leblanc took a few jabs at the provincial Conservatives, making some negative remarks about their leader, Premier Kathy Dunderdale. Leblanc said this province cannot afford four years with a premier as “weak” as Dunderdale. He said Prime Minister Stephen Harper has gotten away with a lot of cuts to this province because of Dunderdale’s ineffective leadership, and Harper will continue to walk all over the people of Newfoundland and Labrador because Dunderdale simply will not take a stand.”(see here)