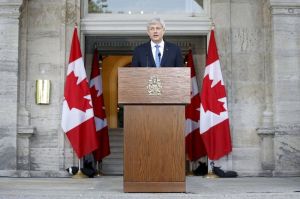 One of the first media issues on Day 1 of the election was about the party leaders’ taking questions from reporters after their initial speeches.

With PM Stephen Harper the focus was on the amount of questions he took which Steve Ladurantye exposes that even though the Media Party whined about the number, they repeatedly asked the same questions:

And Rebel’s Brian Lilley shows CBC’s Terry Milewski as being one of the reporters ‘asking’ his load statement dressed-up as a question which then Harper gives Milewski a public spanking:

Next up was NDP leader Thomas Mulcair who refused to take any questions from reporters and right on schedule, the Media Party blamed Harper for: 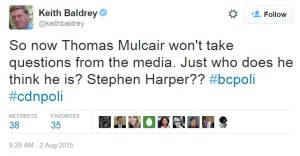 And finally after over a 3 hour delay, Liberal leader Justin Trudeau bragged to the media about always being available for questions:

Most interesting though is how not a single Ottawa journalist has said a word about a Vancouver journalist calling-out Trudeau on his blatant lie.

« CBC business reporter uses two partisans as sources to attack Conservative’s child benefit ads
Elizabeth May acts like a lunatic at campaign kick-off, crickets from the Media Party »
%d bloggers like this: