I’m writing you today in regards to a tweet sent out Feb 6 by CPC MP Scott Reid who stated he has been told by multiple Conservative MPs that one leadership campaign is promising nominations in exchange for their support (see attached).

This is extremely disturbing and as a CPC member, I have heard nothing about an investigation to determine if this has been occurring and if true, which campaign team has been engaging in this behaviour.

My question is straightforward: Has there been an official investigation into this allegation and if so, what was the outcome?

Thanks for your email and for your support of the Conservative party.

Thank you for you quick response.

A sitting CPC MP made it public that he has been told by multiple caucus members that nominations were to be exchanged for their support yet it wasn’t investigated? I’m at a loss to understand what would trigger an investigation if this didn’t?

Do you only act on an official complaint and don’t initiate any yourself?
Dean 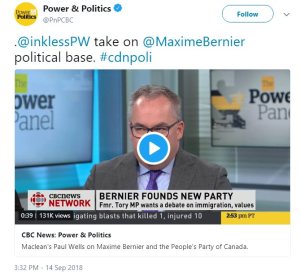 Below is the response I received to my complaint (see here) filed with the CBC Ombudsman:

Thank you for your email addressed to CBC Ombudsman, Esther Enkin regarding Power & Politics.  Since Power & Politics is my responsibility, Jennifer McGuire, General Manager and Editor in Chief of CBC News, asked me to reply.

You wrote to express your concerns about a comment made by Paul Wells on the September 14th show.  You found the comment inappropriate. I agree with you.

At the end of the discussion Mr Wells said “basically his [Mr Bernier’s] voter base right now is the stupidest people on Twitter and so we will see how far that gets him.”

The comment was not appropriate and Mr Wells acknowledged that the following day when he tweeted “Honestly the bit at the end of this clip was a thoughtless bit of hyperbole and it was stupid of me to say it. I apologize to everyone I upset.”

We ask our Power Panellists to offer political commentary based on their own knowledge and experience. We expect them to provide context, to be insightful, outspoken in their views, challenging, and, yes, on occasion, provocative. However, Mr Wells’ comment in this instance was inaccurate and inappropriate.

On September 14th during a segment on CBC’s Power and Politics, Maclean’s senior writer Paul Wells stated that Maxime Bernier’s political base are “the stupidest people on Twitter” and then proceeded to have a hearty laugh at their expense.

It is completely inappropriate for the CBC to have guests on that smear a segment of Canadian voters like Wells did and to make matters even worse the show’s host did nothing to condemn his remarks except to say “No comment”.

I will expect the host, Vassy Kapelos, to issue an on-air apology and assure her viewers that CBC does not share Wells’ opinion nor welcomes such nasty comments from her guests.

Our General Manager and Editor in Chief, Jennifer McGuire, asked me to reply.

In your mail, you raised concerns about what had been the last line of the story: “[Sanders] defence of civility came just a couple of hours after her boss described Congresswoman Maxine Waters as an extraordinarily low IQ person.” You felt that ending lacked context, saying: “This leaves readers with the impression that Trump was attacking Waters even though there were calls for civility from both political sides and that he was being a hypocrite by doing so. You pointed out that after the restaurant incident, “Waters had encouraged people to harass Trump administration officials in public.”

I agree with you that context is important to understanding.  As you’ll see in the link above, we have added a sentence to the end of the story in order to make it clearer.  It now reads:  “Her defence of civility came just a couple of hours after her boss described Congresswoman Maxine Waters as “an extraordinarily low IQ person”, after she called on opponents of the family separation policy to “create a crowd” when encountering members of Trump’s cabinet in public and let them know “they’re not welcome anymore, anywhere.”

However, I should say that adding additional information to a story to make it clearer, a common enough practise, does not meet the threshold required for adding a “Corrections” box. We do that when we have corrected inaccurate information in a story.

Thank you again for your email Mr. Skoreyko, which has resulted in a stronger story.  I hope my reply has assured you that CBC News continues to try to serve its audience fairly and faithfully.

The omission occurs due to Boag’s last line:

Her defence of civility came just a couple of hours after her boss described Congresswoman Maxine Waters as “an extraordinarily low IQ person.”

This leaves readers with the impression that Trump was attacking Waters even though there were calls for civility from both political sides and that he was being a hypocrite for doing so. What Boag omits is that after the restaurant incident, Waters had encouraged people to harass Trump administration officials in public. It was widely reported in both the American and Canadian media and there is no way Boag could be unaware.

Context matters even in opinion pieces and Boag should immediately issue a correction with an attached CBC editor’s footnote explaining the initial omission.